The Unexpected Inheritance of Inspector Chopra, by Vaseem Khan

I didn't sign up for #Diversiverse this year, in part because I can't stick to any kind of reading schedule for love or money these days.  But I had it in the back of my mind when I stopped in at Murder by the Book the other day.  There, this cover caught my eye: 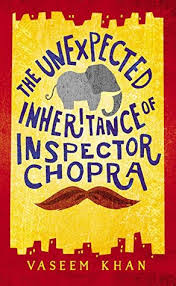 The back-cover blurb sold me:


On the day he retires, Inspector Ashwin Chopra inherits two unexpected mysteries.
The first is the case of a drowned boy, whose suspicious death no one seems to want solved.
And the second is a baby elephant.
As his search for clues takes him across the teeming city of Mumbai, from its grand high-rises to its sprawling slums and deep into its murky underworld, Chopra begins to suspect that there may a great deal more to both his last case and his new ward than he thought.


I immediately wanted to know more about the drowned boy, and the baby elephant, and Inspector Chopra himself.  And I enjoyed this detective story very much.  I started to write "police procedural," though I suppose it doesn't really count as a police story when your detective retires in the first chapter.  But Inspector Chopra ("Retd." as the text often points out) still draws on his contacts in the force, as well as his decades of experience as a police officer.  It was interesting to compare the workings of the Mumbai police in this story with the British and American forces in other stories that I've read.

I can't however think of another detective, private or police, who ends up with a baby elephant on his hands.  It is a gift from Chopra's uncle Bansi, whom he hasn't seen in years.  The elephant, soon named Ganesha after the Hindu god, arrives with only a mysterious letter saying, take care of him, because "this is no ordinary elephant."  How someone with no experience, living in a high-rise apartment in a crowded city, is supposed to take care of him is left to Chopra to figure out, with a lot of help from his wife Poppy.  She expected to have a retired husband around the place.  Instead, she gets one who disappears for long stretches, leaving her with Ganesha and her own disapproving mother.  The little elephant actually has a part to play in the investigation, which added an element almost of magic to what otherwise feels like a very realistic story.  I had to remind myself that "this is no ordinary elephant."  And in the end, who could resist a baby elephant with a taste for Cadbury chocolate?  At one point I started googling pictures of small elephants at play, which made that day 100% better.

I learned from Vaseem Khan's website that he works at University College London, in the Department of Security and Crime Science.  I'm sure he drew on his experiences there in writing this story.  It is an intriguing mystery, with a rather dark turn at the end, before its different threads wrap up neatly together.  I also saw that Mr. Khan is working on a second book with Inspector Chopra and Ganesha, The Perplexing Theft of the Jewel in the Crown, and two more books are planned.  I'm already looking forward to reading them.
Posted by Lisa at 8:48 PM