A belated but very welcome arrival

Last year, a very generous friend gave me a Persephone book token for my birthday. I didn't redeem it right away, I wanted to gloat over it for a while, and to plan very carefully which books I would order. My mother used to say that money burned a hole in my pockets, and usually book gift cards do as well. But I hoarded this one for ages. Then suddenly, a couple of months ago, I decided it was time. After paging through The Persephone Biannually for two days, and changing my mind several times, I put my order in by email and settled down to wait. I waited and waited and waited. Every day (except Sunday) I came home thinking this would be the day that I'd find a package in my mail box, or outside my front door. But nothing. Finally, after about six weeks, I sent another email, asking if by chance my package had been returned. I heard nothing back - and still no package. I was just resigning myself to the loss of my books, when I opened the mailbox today to find three packages (and a pouch - more about that in a minute). There is no date on the packages, so I can't tell if they have just been lost somewhere in the British or United States mail systems. I am so very happy that they finally arrived safely. 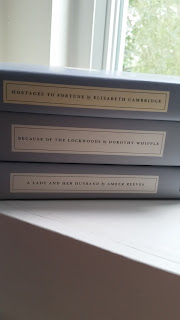 If you can't tell from the picture, the books are first, Hostages to Fortune, by Elizabeth Cambridge, which I've been most anxious to read. Second is Because of the Lockwoods, by Dorothy Whipple. I had an awful time deciding between that one and the two volumes of her short stories, or They Knew Mr Knight. The third is A Lady and Her Husband, by Amber Reeves. That one went on my list as soon as I read about in the Biannually, because I collect stories about tea shops (the kind that serve tea).

I was so sad over the non-appearance of these books that I haven't had the heart to look at the most recent Biannually. Now I can sit down with it and start thinking about my next order.

As if the Persephones weren't enough riches for today, I also received another addition to my Patricia Wentworth addiction collection. 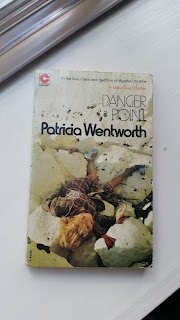 ABE Books managed to find me a fairly reasonable copy of this rare title. Ever since I read Jane's review on Beyond Eden Rock, I've been hoping to get my hands on a copy.

I just read one of the non-Silver books, Nothing Venture from 1932. (I have to trust Dean Street Press that it isn't really supposed to be Nothing Ventured.) The very masterful hero is named Jervis, and the whole time I was reading it I kept thinking of "Master Jervie," the very masterful hero of Jean Webster's classic Daddy-Long-Legs. I haven't read it in years, and after I finished it I went on to the sequel, Dear Enemy. It's been even longer since I read that one, and I had forgotten the frequent and approving references to eugenics.

I'm finding older books a welcome distraction these days. Last week I got a copy of Denis Mackail's Tales from Greenery Street through inter-library loan. Even ABE hasn't been able to find me a copy of that book, though they did find Ian and Felicity. All his stories of young married couples and their cooks-general made me think of Monica Dickens. I ended up re-reading One Pair of Hands, and then I went on to read The Winds of Heaven off the TBR shelves. It's been an interesting week of reading by association. Now though I think I'm going to sit down with Hostages to Fortune. And for the moment I can stop envying all the travelers back from London with their stacks of books, like Jenny of Reading the End and Jennifer from Holds Upon Happiness.

Touch and Go, by Patricia Wentworth

When I first came across the recent Dean Street Press reprints of Patricia Wentworth's books, I had no idea where to start. I have been collecting and enjoying her "Miss Silver" books for a couple of years now, without realizing that she wrote so many others without Miss Silver. From the helpful list in the front of the DSP books, I discovered there are three mini-series with different detectives, and a raft of standalone books. I'd hoped to collect the three featuring Miss Silver's frequent collaborators from Scotland Yard, her favorite Frank Abbott and his boss Ernest Lamb. But Murder by Book doesn't have those yet. So I decided to look at the books were published in the 1930s and early 1940s, since so many of my favorite Miss Silvers fall in those years. The DSP books helpfully include the publication date on the back cover.

Touch and Go was published in 1934, in the UK as Devil in the Dark. It isn't a mystery so much as a novel of suspense. Sarah Trent, a young woman of good family and no money, gets a place as companion to 17-year-old Lucilla Hildred, who has just lost her mother and step-father in a car crash. Lucilla's father died in the Great War, as did his younger brother. The recent death of another uncle has left her the heiress to the Hildred property. Lucilla's guardians are worried about her, not least because she had to be taken away from her school, after mysteries fires kept breaking out in her room. Sarah meets her young charge when Lucilla falls down nearly under the wheels of Sarah's car. There have been other incidents - is Lucilla causing them? And why is a man named John Brown wandering around the grounds, supposedly painting the scenery - but what's his excuse in the middle of the night?

Sarah is one of Patricia Wentworth's independent and sassy heroines, and Lucilla is more than a match for her. I enjoyed watching them run rings around Lucilla's elderly guardian Aunt Marina Hildred - actually a cousin, as she will explain in great detail to anyone she can catch (I deal with enthusiastic family historians on a regular basis). And I knew that Patricia Wentworth is a fan of Charlotte M. Yonge's books, but I was still happily surprised when Lucilla of all people quoted from The Pillars of the House.

I had a pretty good idea of where the story was going, but I still peeked ahead to see if I was right. I was in the essentials but not in the details, which had a couple of nice twists I didn't see coming. I toss the term "favorite" around a lot with Patricia Wentworth's books, but this one went straight to the top of my list.
Posted by Lisa at 8:38 PM 6 comments:

I feel the same disbelief and anger and anxiety tonight that I felt on Election Night. Tonight I am staying away from the news, and from Twitter. I went for a long walk in the breezy evening, I have eaten some Cadbury mini-eggs, I have petted cats. I am going to write about some of my favorite books, and then I'm going to take a quick turn around the blogging world and see what other people have been reading.

Ursula Le Guin's Earthsea books are deep in my literary DNA. One of my dad's colleagues gave me the original "Earthsea Trilogy," small Bantam paperback editions in a grey box. This was on the front cover of both the box and the first book. 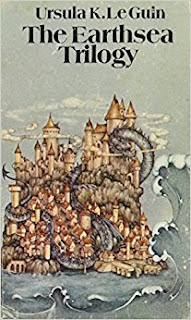 I still have the books she gave me, nearly 40 years later. I read them over and over again as a teenager. The first is the story of the young boy Ged, sent to study wizardry at the academy on Roke Island, struggling to balance his power and his ambition. (I still grieve for his otek.) In the second book, a young priestess serving dark powers in a far distant land meets a traveler from the west, who seeks an ancient artifact. The third book, which was always my least favorite, concerns a break in the world and a perversion of its magic.

I love so much about Earthsea. Ursula Le Guin created a rich world of islands scattered across the seas. This world has a fascinating history and mythology. We learn parts of it through the stories that her people tell, the songs and the poetry they share. I love the dragons that wind through her stories, which have always seemed the perfect dragons of fantasy - wickedly intelligent, sharp-tongued, speaking the Old Speech of Making, the language the wizards use in their spells. In the first book Ged becomes a dragon-lord; as he learns, this is simply someone the dragons will speak to, but it becomes part of his own legend.

I thought the story of Earthsea was neatly contained in those three books, in their little box. It was only years after its publication that I came across a fourth book, Tehanu. It is subtitled "The Last Book of Earthsea," and it instantly became my favorite (and one of my desert-island books). It takes up the story of Tenar, the young priestess of the second book (The Tombs of Atuan). Now a widowed mother of two, she takes in a child, burned and left for dead (presumably by her parents). It is a book about the lives of women, the power of women, the magic of women. There are no female wizards in Earthsea, though there are witches and healing women. But something is broken in the great magic, and Tenar with her ward may have part of the solution.

More than ten years later, I was surprised to find a new book, Tales from Earthsea. Ursula Le Guin wrote in the introduction that she was rather surprised herself.


Seven or eight years after Tehanu was published, I was asked to write a story set in Earthsea. A mere glimpse at the place told me that things had been happening there while I wasn't looking. It was high time to go back and find out what was going on now.
I also wanted information on various things that had happened back then, before Ged and Tenar were born. A good deal about Earthsea, about wizards, about Roke Island, about dragons, had begun to puzzle me. In order to understand current events, I needed to do some historical research, to spend some time in the Archives of the Archipelago.

As an archivist, I find the idea of research in fictional archives enchanting. I'd love to rummage through the Wimsey papers at Duke's Denver, or the Culter/St. Pol papers in Scotland, or the Emerson archives that I'm sure have been donated to the British Museum.

This book of stories was followed shortly by The Other Wind, set fifteen years after Tehanu. I bought it as soon as it came out, and I read it immediately - and I disliked it intensely. I have no idea why now, except a vague memory of finding it confusing. I kept it on the shelves, but I have never re-read it (or Tales from Earthsea). When I read Tehanu again the other day, though, I found myself wanting more stories of Earthsea. I read The Other Wind again, and it was like reading it for the first time - and I loved it. It continues the story of Ged, Tenar, Tehanu, and the dragons. It takes us to different parts of the Archipelago, and eventually back to Roke itself, on a quest. A wonderful story of adventure, it also fills in some of the history of this world, and deepens its mythology. I must have been having a bad book day, the first time I read this. I'm so glad to have re-discovered it, and on my own shelves.
Posted by Lisa at 8:53 PM 4 comments: