The Sun in Scorpio, by Margery Sharp

Having missed Jane's birthday party for Margery Sharp last year, I was determined to join in this year. I have been saving a couple of books for it, and then I added two more to the stacks, just to be safe. I chose this one to read first, knowing nothing about the story.

The edition I read is a Perennial Library, from Harper & Row. I've complained about their strange covers before (particularly Cluny Brown with an old-fashioned diving helmet). At first I thought this one was another odd one: 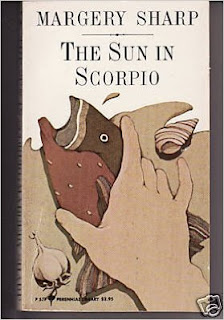 But thinking about it later I realized it is completely appropriate, because the main character is this story is very much a fish out of water. We meet Cathy Pennon at aged nine, living with her parents, brother and sister on an island in the Mediterranean. It was "by no means so important as Malta (hence its nick-name, The Next-Door Island)..." From reading Dorothy Dunnett, I immediately assumed this was Gozo, but the book never really says.

The Pennons are a bit of a fish-out-of-water family on the Island. They aren't part of the British administration, nor of the service families in residence there. They are living on the proceeds of Mr. Pennon's family business back in England. Mrs. Pennon explains to everyone that they've come to the Island because of her husband's health. The narrator tells us though that "it wasn't so much Henry Pennon's chest that was weak as his will." However, as war begins to threaten in 1914, he decides to take his family home.

Life in England comes as a tremendous shock to the family, after the warmth and ease of the Island. Cathy's sister Muriel and brother Alan find their feet in school, but she remains the odd one out. She is also the one most attached to the Island and their life there. She holds fast to something the Governor told her before they left: "Always hold the thread to the sun." I'm not sure exactly what that means, but for Cathy those become words to live by. What she wants most of all is to return to the sun, to the Island or at least the Mediterranean. When her sister is trying to decide which of two young men to marry, Cathy campaigns for the one who manages a tea plantation in Ceylon, so that she can come visit. And when she has left school, she accepts a job as nursery-governess to Lady Jean Lutterel at her home in Devon, mainly because Lady Jean is planning to take her daughter Elspet to Malta that summer. Cathy will even accept the ridiculously low wages, for the chance to get back to the sun.

Cathy is completely unqualified as a governess, but on the other hand it turns out that Lady Jean had no intention of taking her or Elspet to Malta (she has a handsome young man as a traveling companion instead). In between some desultory teaching sessions with Elspet, Cathy settles down to life at Wellscombe Manor. At first as a governess she is again a fish out of water, not part of the family but ranked above the other staff. But once she discovers a nightly poker game in the kitchen, and shows off the skills she learned playing on the Island, she is made welcome below-stairs. Even after Elspet goes off to boarding school, Cathy stays on at the Manor, right through the coming of the second world war. With the Lutterels in London, and most of the staff gone, she keeps the house together, with Cook and the butler Mr. Weaver. The end of the war finds them exhausted with the effort. The news that the Lutterels are shutting the Manor down comes as a great shock to Cathy, but it may open a way for her to return finally to the Island.

I found Cathy a very interesting and sympathetic character. (I've been a fish out of water more than once myself, in moving around the United States and living for several months in Great Britain.) In some ways, she reminded me of Cluny Brown. Both are the proverbial square pegs, full of life and energy, refusing to conform and constantly seeking their own way. But Cathy has a purpose in life, a mission, which Cluny lacks. No one else knows of it, nor would they understand if they did. She has a tougher struggle, and a longer one. She has to work hard (though not as a governess). But I think the ending of her story will be a happy one. The back-cover blurb says that the book "shows Cathy as an unwilling symbol of the 'average' Briton's endurance of years of radical historical change. It is a sensitive chronicle of those changes..." I don't agree with that. Yes, the story covers the years from 1914 to 1945, but the "radical historical change" mostly passes Cathy by, particularly once she settles in at Wellscombe Manor. The narrative occasionally shifts to follow her siblings Muriel and Alan, or one of the other characters, who do experience more of the changes, but to me at least those sections felt like distractions from Cathy's story.

I'm grateful to Jane for introducing me to Margery Sharp, and happy to join in celebrating her life and books. I just wish her books were easier to find! I'm particularly interested in The Flowering Thorn, but the few copies available are outside my price range. I'll keep my eyes open, because I found a copy of The Foolish Gentlewoman on the shelves of a bookstore here in Houston. Meanwhile, I think Britannia Mews will be next. And I'm sure the reviews from others joining the party will add to my reading list.
Posted by Lisa at 5:56 AM