The Stone of Chastity, for Margery Sharp Day

When I chose The Stone of Chastity to read for this year's celebration of Margery Sharp, hosted by Jane at Beyond Eden Rock, I knew nothing about it. The American edition I found on-line has a very decorative cover: 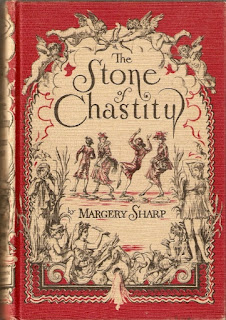 But it has no dust jacket, so there was no synopsis to tell me anything about the story. I wasn't expecting something along of the lines of a mystery story in a rural village. There is an investigation, interviews with local residents, even a type of trial. But rather than murder, the hunt is for the Stone of the title, and the stories about it.

The person directing the investigation is Professor Isaac Pounce, a specialist in folklore and magic. Some months earlier, while visiting friends, he went rooting around in their attics ("while his hosts were looking for him to play bridge"), and found a diary with a very intriguing entry from 1803:


Mr. C. back from Gillenham. I thank God in my striped India muslin, rose-colour sash. Mr. C. entertaining as ever; tells us an odd strange legend, that in the stream there is a certain stepping-stone, on which if a Miss who should by rights have quitted that Title, or a wife unfaithful, set her foot, the poor creature infallibly stumbles and is muddied for all to see. 'Tis called the Stone of Chastity. Mamma shocked.

There was a further account of a young maidservant, "challenged by her mistress to make trial of the S. of C., did so out of brazenness in her Sunday print, white stockings, fine black shoes, green garters. All ruined by the stinking mud. She now the mother of a fine boy."

The Professor immediately decided he had to investigate this further.

I love stories that begin with an archival discovery. I'd like to have read more of the diary, actually - which the Professor calmly pockets, by the way, stealing it from his friends without a word or a qualm. He quickly locates the village in question, leases a house there, and arrives to carry out his research. He brings his nephew Nicholas as his secretary. Also in the household is Nicholas's mother, the Professor's widowed sister-in-law, and Carmen, a striking young woman whose position there is ambiguous to say the least.

With Nicholas's reluctant help, Professor Pounce prepares a questionnaire for the residents of Gillenham, asking what they know about the Stone of Chastity, and about the maidservant who failed the challenge back in 1803. When one of the villagers turns out to have the Stone itself (embedded in her scullery floor), he plans a public trial of it for the local women. He never stops to consider whether the residents might find his questions about their virtue - and the entire topic of chastity - inappropriate and offensive. He is magnificently self-absorbed, intent only on the research. His unwilling assistant does realize that trouble is brewing, but he is distracted himself by Carmen and then by his pursuit of another young woman.

I enjoyed this funny, fast-moving story very much. It felt a little different from the other books of Margery Sharp that I have read, which have focused on a central female character, telling her story. Nicholas plays something of that role here, and we see must of the action from his point of view. In his own way, he is nearly as self-absorbed as his uncle. He has recently taken his degree, but he has no plans, no ambition, other than to become a man of the world. I found him a little bit tiresome, yet he at least realizes the trouble that his uncle's research is creating, and he is a kind son.

There are many funny scenes in this book. My favorite came late in the story, as the Professor plans to cap his research with a public trial of the Stone. He forces the reluctant Nicholas to draw a poster inviting the local women to take part, which he posts (over Nicholas's objections) on the church door.


By two o'clock that afternoon there were nineteen names on the Professor's list: those of Mrs. Jim, Mrs. Ada Thirkettle, Sally Thirkettle, Grace Uffley, Violet and Mabel Brain, Mrs. Jack Fletcher (all in the handwriting of the first), and twelve Boy Scouts.
By three o'clock the poster had been torn down. There was no evidence as to who had done this, except that it was Mrs. Crowner's day for cleaning the church brasses. Fortunately the Professor had already visited the poster once and made a note of the first seven signatures. (The dozen Boy Scouts he rightly ignored.)

The Boy Scouts made me laugh out loud. On the day of the Trial, they are "turned out in full force, hopefully bringing their stretcher with them."

Thank you to Jane for introducing me to Margery Sharp, and for hosting this annual celebration of her books. I see that she has posted about this book as well. I'm looking forward to seeing what others have read, which I'm sure will add to my Margery Sharp collection - or at least my wish list, since some of her books are still out of print.
Posted by Lisa at 6:25 AM