Take Out, by Margaret Maron

When Margaret Maron announced that she was retiring from writing, it finally motivated me to try her first series, police procedurals centered around Lt. Sigrid Harald of the New York Police Department. I have for many years been a big fan of the Deborah Knott series set in the fictional Colleton County, North Carolina. I re-read the books regularly, and I was sorry when Maron announced that the 20th, Long Upon the Land, would be the last. I've gotten very attached to Judge Deborah Knott and her extended family.

I had already read Maron's two stand-alone novels, Bloody Kin and Last Lessons of Summer, both set in North Carolina as well. The events in Bloody Kin take place before the first Deborah story and though it doesn't feature the Knott family, it introduces people who play important parts in the series. I also tracked down two books of her short stories, the covers of which I find unsettling: 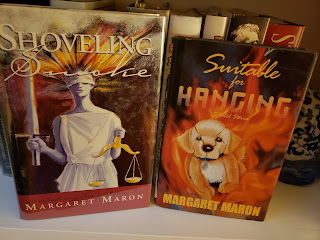 I remember picking up one of the Sigrid Harald books at the library at some point, but it was late in the series and concerned the death of a major character. That didn't seem a good place to start, but it also didn't inspire me to look for the earlier books. I finally "met" Sigrid in Three-Day Town, where Deborah and her husband Dwight spend a belated honeymoon in New York (and of course stumble into a murder case). Sigrid, whose grandmother lives in Colleton County, then comes to North Carolina in the following book, The Buzzard Table. When Margaret Maron wrote a final book for Sigrid's series, I decided it was time to complete my collection of her books and finally read those stories.

I enjoyed the series, if not quite as much as the Knott books. I appreciate a police series with a woman lead, and these also include minimal gore. However, Take Out is not the place to start the series, if anyone were inclined to start a nine-book series with the last book (I couldn't, myself). It begins with One Coffee With, where Sigrid and her team are called to investigate a murder in the art department of Vanderlyn College. They follow the familiar police procedural format, as different members of the team follow up leads under Sigrid's directions. There are personal asides as well, such as Sigrid's relationship with her mother, a Pulitzer-prize winning photojournalist. Sigrid's father, also an NYPD detective, was killed in the line of duty when she was a child, and we gradually learn more about his death and her parents' lives.

I don't know if this counts as a spoiler, but I'll leave a couple of extra lines just in case.

We also see Sigrid's slowly-developing relationship with Oscar Nauman, whom she meets during the investigation at the college. He is the chair of the department and also one of the leading artists of the 20th century. Sigrid is a prickly loner who doesn't want to get involved with Nauman, but he gradually wins her over (and not in a creepy demanding way). But then, just as they settle into their relationship, he is killed in a car accident in California. Sigrid collapses into grief, and that book (Past Imperfect) was really hard to read. She also learns that Nauman has left his entire estate to her. With the paintings alone she is suddenly rich, yet also responsible for his legacy.

Take Out opens about a year after his death - though oddly before the events in Three-Day Town (and as a reference to "the Towers" makes clear, before 9/11). The case involves two men found dead on a bench, with containers of take-out food between them. The lasagna and fettuccine they shared turn out to be laced with coumadin, a blood thinner. One of the victims was a homeless man, Matty, a drug addict whose godmother (a Mafia widow) regularly sent boxes of take-out to the park bench. There seems to be no connection with the other man, Jack, a retired stagehand. The investigation plays out against a background of disturbing news for Sigrid: a young man has arrived from Germany, claiming to be Nauman's biological son and therefore entitled to his estate. There is also a neat little subplot linking back to Corpus Christmas, set in a not-very-exciting historic house museum. Maron writes in an "Author's Note" that "those pictures that had been left stashed in the basement of the Breul House...kept begging to be taken out of that trunk," and partly inspired this book.

Like the other books in the series, Take Out feels a bit old-fashioned to me, and not just because Maron deliberately set it in the 1990s. I think I will pick up these books when I am in the mood for a police procedural. I re-read the Knott books for the setting and the characters, as much as for the cases that Deborah and Dwight investigate. Actually, writing this makes me think it may be time for another visit back to Colleton County.
Posted by Lisa at 2:58 PM