An English Governess in the Great War, the diaries of Mary Thorp 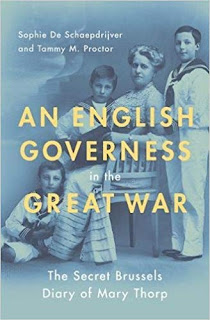 I came across this book while looking for more accounts of nursing in the Great War. The subtitle caught my eye: "The Secret Brussels Diary of Mary Thorp." As the introduction explains, it was secret because anonymous, and because keeping a diary in occupied Belgium during the Great War was dangerous. In her first entry, in September 1916, Mary Thorp writes


Several times, in the beginning of the war, I wanted to start a diary, but was dissuaded from doing so, because it was considered dangerous; a Jesuit father was shot during the tragic Louvain days of August 1914, for having written a few impressions.

A footnote explains, "MT refers to the well-known fate of Eugène Dupiéreux, a young Jesuit student executed during the invasion of Louvain for keeping a diary of the 'atrocities.'"

What I have read on the Great War has focused mainly on the war itself, the experiences of soldiers and nurses. With the Second World War, I have read more about life on the home front, both in the United States and Britain, and under Nazi occupation in Europe. It was through Dorothy Canfield's short stories that I first saw the European home front in the Great War, written of course from an American perspective and focused on France and Belgium.

Mary Thorp lived most of her life in Belgium. Her parents moved there from England when she was nine, in part because of family conflict over their illegal marriage (her father married his deceased wife's sister, and only four months before Mary's birth at that). Mary took her first position as a governess in a Belgian family at age 24. The editors note that she was well-educated, speaking and writing French superbly. She had also converted to Catholicism at some point, which was an asset for an English governess. "By 1910, she was working for one of the wealthiest families in Belgium, the Wittoucks." Paul Wittouck owned one of the largest sugar refineries in Europe. Catherine de Medem Wittouck was a Russian aristocrat who "propelled the household to the center of Brussels social life..." Thorp had charge of their three sons, Pavel, Micha, and Serge. The family moved between their townhouse in Brussels and their summer residence, La Fougeraie, which Paul Wittouck had remodeled in the style of a Louis XIV chateau.

Mary Thorp's life with the Wittoucks was a comfortable one, and it certainly cushioned her against the worst effects of the German occupation of Belgium. She was very aware of her privilege. She volunteered with two organizations, the Assistance Discrète and the Union Patriotique des Femmes Belges, that provided food and other assistance to the needy. She visited clients, bringing them food and clothing, helping them with appeals to the German authorities, trying to find work for them. One 1917 diary entry records, "Mr. W. gave everyone in the house 5 kilos of delicious sugar," a very expensive gift at a time when sugar was heavily rationed. Thorp goes on to say "I have made 20 1/2 lb packets to give to the needy..." She could presumably do so because the Wittoucks' house was stocked with sugar, but I was still struck with her immediate generosity.

Mary Thorp kept her diaries in small notebooks. The editors, Sophie De Schaepdrijver and Tammy M. Proctor, have kept the divisions between the notebooks, with short introductions to each new volume that provide context both to Thorp's life at the time and the larger situation with the war. They also include a very helpful discussion at the start of the book on "Life in an Occupied City: Brussels," as well as many explanatory footnotes. I learned so much from this book, which gave me a completely new perspective on the war. It was sometimes difficult to read, as the war dragged endlessly on. The winter months were particularly hard, because the German authorities commandeered food to be shipped to back to Germany while also cutting fuel rations, to the point that civilians were dying of hunger and cold. There were also massive drafts of forced labor sent to Germany, devastating families. Again, Thorp was cushioned against these dangers, but she saw and recorded them among her friends and her voluntary work.

Mary Thorp remained with the Wittouck family after the war, eventually retiring with a pension to a home they provided. She lived through World War II in Belgium, dying in December of 1945. If she kept any diary of those years, it hasn't been found. I can only imagine what she felt in September of 1939.

The superb interlibrary loan services in our Harris County libraries found me a copy of this at Arkansas Tech University. However, they want it back, so I have found my own copy to add to my small but growing collection on the Great War.
Posted by Lisa at 9:14 AM 3 comments: