Ashes of Honor, by Seanan McGuire

This is the sixth book in Seanan McGuire's "October Daye" urban fantasy series, set in and around San Francisco, and the series just keeps getting better with each book. The main character, October (or Toby), was introduced in the first book (Rosemary and Rue) as a changeling, born to a fae mother from whom she inherited certain abilities that help her work as a private detective in the fae communities. In this book, she is hired by a fae father, who has just learned about his own changeling child, Chelsea, a daughter who inherited his powers of teleportation. Her human mother thinks the fae have kidnapped her child, and she is threatening to reveal their existence to the human world, which will threaten the survival of all the fae. Chelsea doesn't know how to control her powers, and she is breaking through barriers between fae worlds, opening doors that must be closed. Toby has to track her down before she weakens those barriers to the point that worlds begin to collapse. She must also offer Chelsea what all changelings face as children or adolescents: the Choice between the human world and the fae. If she chooses the fae world, she will be separated forever from her human parent. This was the Choice that Toby made, and her fae mother has never forgiven the loss of her husband, Toby's father.

As a changeling herself, Toby understands Chelsea in a way that the pureblood fae never can. Not only did she face the Choice, but so did her own daughter Gillian, who chose the human world of her father. Toby's experiences with lost children and changelings often draw her to these kinds of cases.

This is a series that really needs to be read in order. There is a deep backstory to Toby, one that she is still figuring out. Ms. McGuire is good however at brief reminders of things that happened in previous books, without letting them distract from the current action. The stories are interesting in and of themselves, as Toby works out the different cases. Beyond that, there are three things that captivate me in the stories. The first is Toby herself. She is smart and snarky, but also scarred by her past, by the loss of her child and partner, and by the very complicated relationship with her mother Amadine, one of the most powerful of the fae but one of the least stable. We have gradually learned more about Amadine, but I get the feeling there are more secrets to be revealed.

The second is the family that Toby has built, starting with her liege lord and father figure Sylvester, Duke of Shadowed Hills. (The first book opens with Toby trying to find his wife and daughter, who have been kidnapped.) Then there is May, once the Fetch sent to foretell her upcoming death, now her sister and roommate. They share a house with Quentin, a fosterling at Sylvester's court who is Toby's squire. Toby doesn't know who his parents are, but they don't seem to mind that working with her has already gotten Quentin shot, or that he has had to break her out of (fae) prison. Sylvester assures her that they think her training will best prepare him for the modern worlds. Quentin's best friend Raj hangs around with them a lot. He is a Cait Sidhe, heir to the throne of the local Court of Cats. The king, his uncle Tybalt, has rescued Toby more than once, for reasons that she can't quite understand. (Ms. McGuire is also good at explaining the different races of fae, and keeping them clear in my mind at least, again without overwhelming). One of my favorite characters is The Luidaeg, an immensely powerful fae known and feared as "the sea witch." She and Toby have become friends over the course of the stories, as she has helped with Toby's cases, though her assistance comes at a high price - and not in money.

The third is the politics of a fae world where the Elders - Oberon, Titiania, and Maeve - have withdrawn, leaving their children vulnerable among the humans, but sometimes unable to live in peace among themselves. Fae society is organized along feudal lines. Duke Sylvester is Toby's liege, but they are both subjects of the Queen of Mists, who dislikes them both. At one point Toby herself inherited a territory and became a Countess in her own right, which infuriated the Queen. She later gave up the title (with relief) in part to prevent a war. There are alliances between different groups of the fae, and conflicts of course as well, which Toby must deal with as she works through the different cases she takes on.

I find these books so rich and satisfying that I have been taking a break between them, rather than rushing through the series as I often do. However, Ashes of Honor brought some very interesting developments, and left a couple of questions open, so I have moved straight on to the next, Chimes at Midnight.
Posted by Lisa at 3:58 PM 3 comments:

A new series from Ovidia Yu, finally available in the U.S. 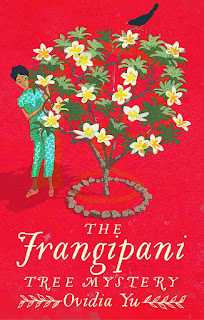 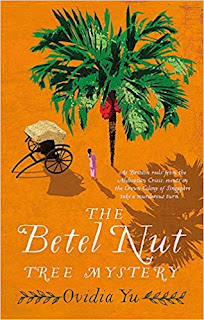 I was thinking the other day that I haven't seen a new book from Ovidia Yu in a while. When I checked her website, I found a new "Aunty Lee" story, Meddling and Murder. But I also learned that she has a new series, the first two books of which are finally available in the U.S. The summary of the first, The Frangipani Tree Mystery, sent me immediately in search of a copy:


1936 in the Crown Colony of Singapore, and the British abdication crisis and rising Japanese threat seem very far away. When the Irish nanny looking after Acting Governor Palin's daughter dies suddenly and mysteriously, mission school-educated local girl Su Lin - an aspiring journalist trying to escape an arranged marriage - is invited to take her place.
But then another murder occurs at the residence and it seems very likely that a killer is stalking the corridors of Government House. It now takes all Su Lin's skills and intelligence to help British-born Chief Inspector Thomas Le Froy solve the murders - and escape with her own life.

Su Lin narrates most of the story, with occasional comments that show she is looking back at the events. "I was to come to know the bungalow on Frangipani Hill very well, but on that long-ago first day I was young and awestruck..." Brief sections also follow Chief Inspector Le Froy, told in the third person, presenting events and conversations that Su Lin learns about later.

I found Su Lin an interesting and sympathetic character straight from the first page, where she is caught between her formidable English mentor (who wants her to take a job with Le Froy) and her very traditional uncle (who has arranged three possible marriages for her).


Knowing Miss Nessa had a soft spot for me, I had asked her to help me find a job. I could not tell her that I longed to be independent like her, and see the world beyond Singapore, so I might have exaggerated my fear of being married off now my schooldays were over. In truth, [my grandmother] Ah Ma might have kept me at home with her to recoup the investment she had made in sending me to learn English reading and writing at the Mission School. I had been considered 'bad luck' since my parents had died from typhoid, and childhood polio had left me with a limp. It had seemed unlikely my family would ever be able to marry me off, but since I was the only child of Ah Ma's favourite son, she had decided to educate rather than sell me. My grandmother's moneylending and black-market businesses had made her rich in the continuing Depression, and she could afford to keep me at home to translate for her, run errands and monitor the household accounts. But grateful though I was to her, the school run by the Mission Centre had opened my eyes to a whole world of possibilities. I wanted more than a lifetime of toil under my grandmother or a mother-in-law. If I was to escape domestic captivity, I would need my own money, which was why I had to find a paying job. (It would have been easier if I had been an English woman rather than a Chinese girl, but I didn't worry about what I couldn't change.)

Su Lin's goal is a career in journalism, inspired by the character Henrietta Stackpole in Henry James' Portrait of a Lady, "whom I had found far more interesting than the book's heroine." She takes the position with the Palins in part out of compassion for their daughter Deborah, at seventeen only a year older than Su Lin, but due to brain damage from an illness mentally a child of seven or so. But Su Lin is also motivated by curiosity, to know what happened to the dead woman, Charity Byrne, an orphan like Su Lin but with no other family. Inspector Le Froy, "known for his willingness to work with - and against - men of any race, language or religion," does discriminate against women. "In the newspapers he had been quoted as saying that the police force would never employ female officers because it was impossible to work with irrational persons." It's lovely to see his prejudices breaking down in the face of Su Lin's intelligence, competence, and compassion. "It was his first inkling of how tough a practical female can be."

There is so much to enjoy in this story, both the setting and the fascinating mix of peoples. Su Lin's best friend from school is Parshanti, whose British mother and Indian father put the family in a complicated, uneasy place in the community. Like Su Lin, Parshanti's options are limited now that her schooling is ended. Her father, a doctor, has trouble finding patients so he works with the police on forensics. Perhaps she will end up helping Su Lin in the cases to come!