I came across this book in Barnes & Noble, and the cover immediately caught my eye: 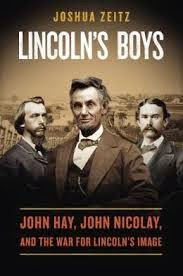 I know something of John G. Nicolay and John Hay, Lincoln's two presidential secretaries, from reading about his administration.  I even have a book about the diary that Hay kept during his White House years, on the TBR stacks.  It was the subtitle of this book that made me pick this up, "...the War for Lincoln's Image," and the inside cover blurb that sold me:


John Hay and John Nicolay, Abraham Lincoln's presidential secretaries, were his close confidants in the darkest and loneliest days of the war.  They enjoyed more access, witnessed more history, and knew Lincoln better than anyone else outside the President's immediate family . . . But when Lincoln died, their task shifted as they became key players in the struggle over his legacy . . . They became, in effect, America's first modern presidential historians and biographers, the originators of the image of Lincoln that subsequent generations would internalize - a humble man with uncommon intellect and talent, A Great Liberator who rose from obscure origins on the prairie . . .


In this book, Joshua Zeitz weaves together four themes: biographies of John Hay and John G. Nicolay; a history of the Lincoln administration (from the secretaries' points of view); and an account of their efforts to define and protect Lincoln's legacy, culminating in a 10-volume biography of him, published in 1890.

Hay and Nicolay (known as George, his middle name) came from origins as obscure as Lincoln's.  Both were from Illinois, already close friends when they met Abraham Lincoln and came east with him after his election to the presidency.  They were young men, Nicolay 29 and Hay only 23, but they wielded considerable power under Lincoln, to the disgust and jealousy of many in Washington.  As the presidential secretaries, they controlled access to the president, and he sent them out as emissaries and spokesmen.  They lived in the White House, just down the hall from the family's quarters.  In hourly contact with Lincoln, watching his administration of the government and the war, they developed a great admiration and love for him, and an enduring loyalty.  They also became close to his oldest son Robert, a young man their age, in a friendship that lasted their whole lives.

I enjoyed the first half of the book, learning more about Nicolay and Hay, and their experiences in the war.  I found the second half of the book was even more interesting.  After Lincoln's assassination, both entered the diplomatic service, with postings to France and Germany.  Both married and had children.  Hay's wife was the daughter of a railroad magnate, from whom she and her husband inherited millions.  That fortune freed Hay from any need to work, though late in life he returned to the diplomatic service, first as Ambassador to Great Britain and then as Secretary of State, under President William McKinley.  I was charmed to read that Hay charmed Queen Victoria, who supposedly said that he was her favorite American ambassador.  Hay was also a well-known author of poetry and short stories, many of which were set in the rural Illinois where he had grown up.  Mark Twain was among those who admired his work.

But both Hay and Nicolay would become much better known for a work of history, their monumental biography of Abraham Lincoln and a collection of his papers, published in 1890.  From the moment of Lincoln's death, people began to write biographies, in the early years portraying him as a martyr to the Union cause.  His former law partner William Herndon was determined to write about the "real" Lincoln, digging up lots of juicy stories in the process, but he was frustrated by Robert Todd Lincoln's refusal to allow access to his father's papers.  These had been removed from the White House shortly after the President's death, and they remained closed to outsiders until 1947.  At the same time, Joshua Zeitz argues, the history of the Civil War was being re-written as the country turned away from the turbulence of the Reconstruction era.  The focus became reconciliation, and the bravery of both Federals and Confederates in the war.  The role of slavery in the war itself was downplayed, emphasizing instead the romance and nobility of the Southern Cause (sometimes dubbed the "Moonlight and Magnolia" version of history, or the "Gone With the Wind" version).  In this process, Lincoln was often portrayed as a weak president, controlled by radical anti-slavery forces, lacking the capacity or the intellect for the presidency.

Hay and Nicolay wanted to correct what they saw as the false versions both of the war and of Abraham Lincoln.  Crucially for their work, they were given access to the Lincoln papers.  Robert Todd Lincoln trusted them with his father's legacy, but he also demanded editorial control.  This exclusive access, combined with their personal knowledge of Lincoln and his administration, and their own archives, made their work ground-breaking, and central to Lincoln scholarship even today.  Amazingly, this massive work was serialized in a magazine, over four years.  It's impossible to imagine a modern audience patiently reading monthly installments of a serious work of history, for so long.

I found this book very interesting and informative.  Joshua Zeitz balances the different elements well.  He focuses more on John Hay than on John Nicolay, perhaps because Hay was more prominent.  As a long-time student of Lincoln, and a reader of biographies, I especially enjoyed the discussion of how biography is written, and how the understanding of Lincoln's in particular has changed over the years, as well as how we as Americans remember the Civil War.  I don't think that I will tackle the ten volumes of Hay and Nicolay's work, but I see that there are abridged editions, and I'm curious now to read some of their own writing on my favorite President.