The Crimes Circle takes on a case

Last month my favorite bookstore, Murder by the Book, was highlighting Golden Age mysteries.  I was in the mood for a classic, and when I saw in their newsletter that the staff highly recommended this one, I stopped in to get a copy.  The jazzy cover alone might have sold me: 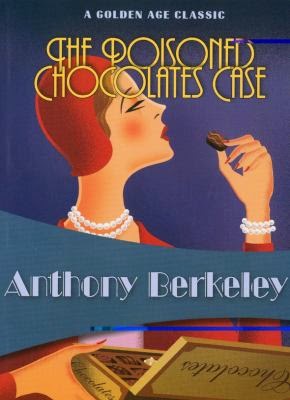 The story opens at a meeting of the Crime Circle, with its founder and president Roger Sheringham in the chair.  He is an author, as are three of the other five members: Alicia Dammers, the modern novelist;  Mrs. Fielder-Flemming, who writes naughty plays; and the well-known writer of detective stories, Morton Harrogate Bradley.  The Circle also includes Sir Charles Wildman, a prominent barrister, and Ambrose Chitterwick, "a mild little man . . . who had been even more surprised at being admitted this company of personages than they had been at finding him amongst them."

Their guest for the evening is Chief Inspector Moresby of Scotland Yard, who has been invited in the expectation that he could be lulled into professional indiscretions by a good dinner and lots of wine.  But instead, Sheringham proposes that the members pool their experience and wisdom to solve a recent crime, whose victims are known to them: the poisoning of Graham and Joan Bendix, by means of a box of chocolates laced with nitrobenzene.  The box had originally been sent to Sir Eustace Pennefather, a baronet with a rather unsavory reputation.  It supposedly came from a well-known candy company, as a promotion for a new variety.  Sir Eustace received the box at his club, where Bendix was also a member.  Having no use for the candy, he offered it to Bendix, who took it home to his wife.  Both tried the chocolates, which had a strange taste, and both later became violently ill.  Graham Bendix, who had only eaten two pieces, survived, but his wife died.  The police who have been investigating are baffled, in the best tradition of detective stories.  Clearly the poison was meant for Sir Eustace, but despite his rather sordid private life they cannot identify a suspect.  The few clues they have don't offer any leads.  The best they can suggest is a homicidal maniac, perhaps one with a grudge against playboys like Sir Eustace.

Roger Sheringham thinks that the members of his Circle can do better.  He suggests that they take a week to consider the evidence, and to follow up any leads they discover.  Then they will convene again over a week, allowing each member one evening to present his or her case.  The members enthusiastically agree, except for Mr. Chitterwick, who "was still wondering, quite unhappily, how, if it ever became necessary to go a-detecting, one went."  I quickly came to dote on Mr. Chitterwick.

In the chapters that follow, each member takes a turn explaining how he or she has solved the crime.  With one exception, we don't get to follow them on their investigations, only to hear about the results with the other members of the Circle.  The exception is Roger Sheringham, whom we do get to see in action, but the narrator is careful to give nothing away.  We are told for example that he shows a picture to various people, but not whose picture it is.  I am on record as completely clueless when it comes to figuring out the mysteries I read, but here it didn't matter, since we aren't given any of the clues anyway.  In that sense, I don't think of this as a typical mystery.  The dedication is to "S.H.J. Cox, Because for once he did not guess it."  I'm not sure how anyone could guess it.

It was a lot of fun to read, though.  It reminded me of the Detection Club that Dorothy L. Sayers belonged to.  I don't know if Anthony Berkeley was also a member.  I found a reference to him in her letters, under his nom de plume Francis Iles (I also learned his real name, Anthony Berkeley Cox).  I see he has written other books featuring Roger Sheringham, and I'll be looking for those, as well as his Iles books.  The story was clever, but I really enjoyed his arch and snarky narrative voice.  The author of detective stories, Morton Harrogate Bradley, was born Percy Robinson and started out as a motor salesman.  "Now he manufactured detective stories, and found his former experience of the public's gullibility not unhelpful."  The author's skewering of Sir Charles Wildman is particularly sharp:


There was no one at the Bar who could so convincingly distort an honest but awkward fact into carrying an entirely different interpretation from that which any ordinary person (counsel for the prosecution, for instance) would have put upon it.  He could take that fact, look it boldly in the face, twist it round, read a message from the back of its neck, turn it inside out and detect auguries from its entrails, dance triumphantly on its corpse, pulverise it completely, re-mould it if necessary into an utterly different shape, and finally, if the fact still had the temerity to retain any vestige of its primary aspect, bellow at it in the most terrifying manner.  If that failed he was quite prepared to weep at it in open court.

That last sentence makes me giggle every time - and picture Sir Impey Biggs.
Posted by Lisa at 8:46 PM