The Nutmeg Tree, by Margery Sharp

This is not the first book by Margery Sharp that I've read this year, it's the third. But I was having internet and other issues when I read The Foolish Gentlewoman and Cluny Brown, so I never got around to writing about them. Let me just say that with Cluny, I have serious doubts about the ending, even though the author assures us it is a happy one. And I am still trying to figure what the cover of the Perennial Library edition I read has to do with the story: 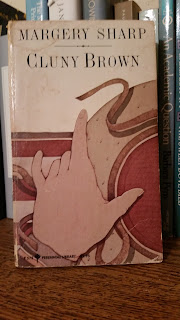 It certainly gave me some odd - and wrong - expectations of the story I was about to read.

Of the three, this 1937 novel is my favorite. The first page introduces us to "Julia, by marriage Mrs. Packett, by courtesy Mrs. Macdermot, [who] lay in her bath singing the Marseillaise." She has locked herself in the bathroom with some of her household goods, while outside the door "the men from the Bayswater Hire Furniture Company" are removing the rest. She has hardly a penny to her name, and she needs at least £15. She has just received a letter from her daughter, asking her to come to France, where Susan is staying with her paternal grandmother. "The point is," Susan writes, "[here the small neat writing grew suddenly larger] that I want to get married and Grandmother objects. I know there are all sorts of legal complications, but you are my mother, and you ought to be consulted." Susan is the result of a brief liaison and hasty marriage in the Great War. Julia, a chorus girl, was happy to leave her child with her husband's parents after he was killed in action. A good-time girl, she found life in the country stifling. She hasn't seen her daughter in sixteen years, but she can't ignore Susan's plea for help.

On the boat-train to Paris, Julia falls in with a family of acrobats, the Flying Genocchios, and she ends up filling in for their ailing mother in the first night's show. That rang a bell with me. I realized that I had seen a version of this story in the 1948 film, "Julia Misbehaves," with Greer Garson playing Julia and Elizabeth Taylor Susan. There were some major changes to the story line, starting with the fact that Julia is still married to Susan's father, played by Walter Pidgeon. I lost interest in the film pretty early on, partly because I find Walter Pidgeon really irritating as an actor (and he was cast with Greer Garson so often). I somehow missed two actresses, Lucille Watson (Mrs. Packett) and Mary Boland (Ma Ghenoccio), both of whom were in "The Women" - which (completely off-topic), is one of my favorite films.

Dragging this back ON-topic, I knew nothing about this story going in, and I wasn't always sure where it was leading. I did want a happy ending for Julia. I took to her straight off, with her happy-go-lucky outlook on life, her generosity and her honesty (at least when it really matters). She gave up her child very easily, but she did have Susan's best interests in mind, as well as her own. And she tries so hard, meeting Susan and Mrs. Packett again, to be the right kind of mother, to be a lady, not to embarrass her daughter. I wanted her to succeed. I knew how I wanted her story to end, but I wasn't sure up until the last page that it was going to. I thought The Foolish Gentlewoman had rather a sad ending, for everyone except the self-satisfied Simon Brocken, and as I said I don't quite trust Cluny Brown's, but I do Julia's.

One puzzle: why does Julia have policemen embroidered on all the legs of her camiknickers? I know it must be naughty, because she has to buy new ones for the visit to France - along with a "Matron's Model hat," which in the end of course doesn't quite fit her. I've just been browsing over at Moira's Clothes in Books blog, where she has several entries on this book, including a hat that could be Julia's (but no embroidered camiknickers).

Jane from Eden Rock has mentioned hosting another Margery Sharp reading event. I am prepared for it, with Harlequin House and The Sun in Scorpio still on the TBR shelves. I wish her books were easier to find!
Posted by Lisa at 8:37 PM