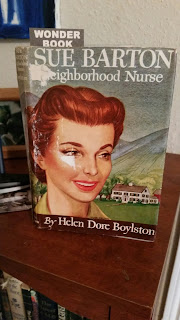 The other day, after I finished Dorothy Canfield's Her Son's Wife, I was trying to make a list of other books set in Vermont, the home of so many of her characters. Of course I thought of Shirley Jackson's Life Among the Savages and Raising Demons, and the American adventures of the Von Trapp family. I was also thinking of the later books in this series. But when I sat down with Sue Barton, Rural Nurse and Sue Barton, Staff Nurse, I was reminded that they take place in rural New Hampshire instead. In Staff Nurse, Sue goes back to work while her husband Bill is in a sanitarium for TB treatment. There was a little summary in the first chapter, Sue "transporting herself back a year in order to enjoy the feeling of having second sight..." That made me realize that I was missing the book where what she remembers take place.

I was lucky enough to find a copy of the book, Sue Barton, Neighborhood Nurse, on-line. When I first started looking for these books, some of the titles were very hard to find. I remember when the only copies of Sue Barton, Visiting Nurse were going for hundreds of dollars. There certainly seem to be more copies available now, at much more reasonable prices. There have also been some modern reprints, from Image Cascade Publishing, with nicely retro covers.

I have written before about how important these books were to me, growing up. My mother was a nurse, as were two of my aunts and several glamorous older cousins. I wanted to go to nursing school, to earn my cap and wear my crisp white uniform (with the white nylons). I devoured books about nursing schools the way others did boarding school stories. (I wish now I could remember the title or author of the book where a young African American woman desegregates a nursing school.) I didn't question why there were no women doctors in these books, nor did I ask myself if my extreme reaction to blood might perhaps disqualify me from nursing. Eventually, I fell in love with studying French and decided to become a translator at the United Nations instead - but I never lost my love for nursing school stories. I checked the Sue Barton books out of libraries well into adulthood, until they disappeared from the shelves. I was so happy when I was able to find copies on-line.

They do of course read a little differently to me now, at my advanced age. I still enjoy the two books about Sue's training, Student Nurse (1936) and Senior Nurse (1937), though the second book is as much about her romance with Bill as it is with nursing (the course of true love can't run too smoothly). It's interesting that Sue asks Bill to delay their marriage, because she wants to work as a visiting nurse in the Henry Street Settlement program (Visiting Nurse, 1938). In the next book, Rural Nurse (1939), Bill has to postpone their marriage after his father dies, but Sue joins him as a community nurse in New Hampshire. After their marriage, they work together at a new local hospital, donated by a rich neighbor (Superintendent of Nurses, 1940). Sue is the director of the tiny nursing school that they open, but with this book, the stories become as much about their marriage and (later) family.

I hadn't re-read Neighborhood Nurse (1947) in years, but from the title I was expecting something about community nursing. Instead, though Sue spends one day filling in for the district visiting nurse, this story is about marriage, family, and motherhood. Sue does wonder at the beginning if she is wasting her nursing education and experience, but in the end she has come to realize that her children are her most important work. This might fit in with the times in which Helen Dore Boylston was writing it, when women had been encouraged to return to the home after the war-work of the Second World War (which plays no part whatsoever in these books). Boylston herself never married, however, nor did she have children. (She lived for several years with Rose Wilder Lane, in Albania and at the home of Lane's parents, Almanzo and Laura [Ingalls] Wilder, but everything I've read dodges the question of their relationship, whether partners or friends.) In the last of the series, Staff Nurse (1952), Sue escapes back to the hospital work she loves, partly to cope with her anxiety, though she doesn't neglect her motherly duties.  It's interesting that Boylston wrote another series of books about a career woman, the actress Carol Page. I wonder if they end with Carol retiring from the stage for the domestic life.

These are by no means great books, but they're part of my literary DNA, and still comfort reads for me. I'm probably likely to re-read Neighborhood Nurse least often, because I don't find Sue's kids that interesting, and it has almost no nursing in it, but I'm still glad to have a copy. And maybe I will re-read Visiting Nurse for next year's 1938 Club!
Posted by Lisa at 3:45 PM