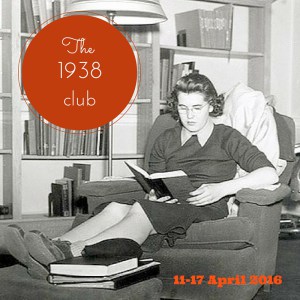 Looking at the lists of books published in 1938, I didn't find too many for children or young adults. I was expecting to see one of Laura Ingalls Wilder's Little House books there, but that year fell between On the Banks of Plum Creek and By the Shores of Silver Lake. I did notice though when I completed my Sue Barton collection that the third in the series, Sue Barton, Visiting Nurse, was published in 1938, so I decided to re-read it (for the umpteenth time).

I wrote about this book in the early days of my blog (my original post is here). Briefly, it is the story of Sue Barton and her friend Kit Van Dyke, newly-qualified nurses who come to New York City to work in the Henry Street Settlements (a real place). As visiting nurses, they go into the immigrant neighborhoods and the tenements to provide home health care. Sue, who is secretly engaged to the handsome doctor Bill Barry, wants to work for a time before marriage. She falls in love with settlement work and is reluctant to give it up, despite increasing pressure from Bill.

Reading this book again, I was struck by a couple of things. First, there is nothing in the story that ties it specifically to the late 1930s. There are no references to current events or politics. People are out of work, but there is no mention of the Depression. Sue does think at one point that "This was the way the nurses in the Great War had had to work, making the best of what meagre equipment they had -" (and Helen Dore Boylston knew all about that from her own war-time nursing) - which would suggest a book written before World War II. There are also a couple of references to a fellow nurse, Miss Glines, whom Sue mentally categorizes as a "whoops-my-dear" type, a phrase that immediately made me think of the 1920s and Bright Young Things in stockings and gin. This lack of specifics in the setting here carries over in the later books, which were published in the 1940s and early 1950s but never mention the Second World War, even in passing.

Second, reading this again reminded me how much I love stories about young women coming to the Big City and making good. For stories set in the United States, this usually means New York. Here Sue and Kit get to live in a cozy little red-brick house in Greenwich Village, with a view of the Empire State Building. They can afford it because the rent is ridiculously low, due to rumors that the house is haunted. They also get to stay in luxury with cousins of Kit in their apartment on Central Park West. On their free days, they can wander the city and play tourist. And their Henry Street uniforms open doors everywhere. Helen Boylston lived in New York herself at different times, and she clearly loved it. Her city has slums and dirt and poverty, but it's full of life and energy - and very little crime. I'd love to visit her city. And reading this made me want to re-read other New York books, like All-of-a-Kind Family and The Saturdays, and watch some Rosalind Russell movies ("His Girl Friday" or "My Sister Eileen" - and "The Women").

N.B. In my original post, I mistakenly wrote that this book was published in 1939.
Posted by Lisa at 7:54 PM