Christmas presents, for me

It's a good thing that my TBR resolution doesn't go into effect until New Year's. I went to Kaboom Books this evening in search of one book, and I came home with five. The book I wanted was Penelope Lively's Pack of Cards. I had somehow gotten the idea that I didn't like her short stories, but this year I read The Purple Swamp Hen and Other Stories and Beyond the Blue Mountains. I also re-read Making It Up, so I was clearly wrong about her stories. I had a feeling that Kaboom would have a copy of Pack of Cards, which they did.

While I was there, I thought I'd look for Eudora Welty's books. Some years ago I gave all my copies of her books to the library sale. I can't remember why now. I've been thinking lately that it might have been a mistake, and I'd like to try her books again. There was a copy of Delta Wedding on the shelves, which was the first book of hers that I read, and I thought it would be a good place to start again.

With the other three books, I feel like I hit the bookish jackpot. 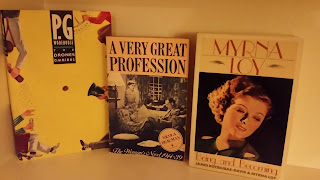 The owner was chatting with the customers ahead of me when I went to check out, so I wandered back into the shelves. That's where I came across a Virago edition of A Very Great Profession, by Nicola Beauman. I couldn't believe my eyes. I've resisted ordering the new Persephone edition, because I know that this exploration of "The Woman's Novel 1914-1939" is going to add a lot of books to my "want to read" lists. So my discovery of it tucked away on a high back shelf was clearly Meant to Be.

I also found my way into a small back room for the first time. There I found Myrna Loy's autobiography, Being and Becoming. I had no idea she wrote her autobiography. She is one of my favorite actresses, particularly in the many films she made with William Powell. I think Libeled Lady is the best and funniest, and I watch The Thin Man every Christmas. I will read any memoir about the Golden Age of Hollywood, but I'm also interested in reading about her political and social activism.

And finally, The Drones Omnibus of stories by P.G. Wodehouse. I love the Drones Club, which counts Bertie Wooster as a member. I enjoy the adventures of the Eggs, Beans, and Crumpets, as the members style themselves. I don't think there are any Wooster stories in this collection, but it does include "Uncle Fred Flits By." I dote on the Earl of Ickenham. And I'm intrigued by one story, "Goodbye to All Cats." It begins, "As the club kitten sauntered into the smoking room of the Drones Club..." A club kitten - this makes me love the Drones Club even more.

Those three books are sitting on the last open shelf in the house. I do still have some space for double-shelving in some of the bookcases, but not much. So I either need to exercise some bookish restraint, or I need to look for another bookcase, and figure out where to put it. Hmmm, which is more likely...
Posted by Lisa at 9:42 PM