That Lady, by Kate O'Brien

When I re-discovered Kate O'Brien's books and started looking for the ones I hadn't read yet, I put this one on the bottom of my list. A novel about the court of King Philip II of Spain seemed an odd fit with her other books. I had forgotten that her first book, Without My Cloak, is a historical novel, a family story that opens in 1879, and The Ante-Room is set in the 1880s. I was also thinking of her primarily as an Irish writer. From her novel Mary Lavelle and the travelogue Farewell Spain I learned more about her own experiences living and working in Spain, and about her love for the county and its people. In the end, a copy of That Lady found me, turning up on the library sale shelves, a gently-used hardback for all of $1. I read it slowly over the past week, savoring it, and wishing I hadn't been so misguided in my snap judgement.

The lady of the title is Ana de Mendoza y de la Cerda, Princess of Eboli and Duchess of Pastrana. As the story opens, in October of 1576, she is a widow of 36, with six surviving children. She is awaiting the arrival of King Philip at her country estate of Pastrana, east of Madrid in the province of Guadalajara. Ana was a real person, the heiress to an immense fortune and the highest position in Castilian Spain. She was married at age twelve to Philip's political adviser and right-hand man, Ruy Gomez de Silva. (I had already met Ruy, and Philip as well, in Dorothy Dunnett's Lymond Chronicles.) From what I have read, there were a lot of stories and rumors around Ana de Mendoza. She famously fought a duel with one of her father's pages when she was fourteen, during which she lost an eye, and wore a patch over the socket for the rest of her life. There are several portraits of her in existence. I found this one on Wikimedia Commons (source here): 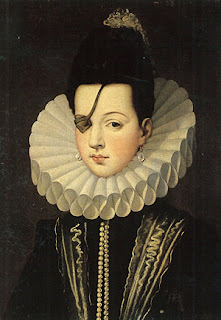 The pictures I found intrigued me, and made me want to know more about Ana de Mendoza.

When King Philip arrives, Ana learns that he has made the trip to ask her to come back to Madrid. There are family matters that need her attention, and he also wants to squelch rumors - that the Princess has gone mad, or has quietly been murdered. Ana is reluctant to leave her quiet country life but she agrees. In Madrid, she makes a decision, to take a lover, which she believes should be a private matter. However, it becomes a public and then a political one, bringing consequences she could never have imagined. Knowing nothing of her story, I became increasingly concerned about how it would end, and I finally gave in and read the last two chapters.

At first this did seem quite different from the books of Kate O'Brien's that I have read. But as Ana's story unfolded, two familiar themes linked it to O'Brien's other books. First, Ana has had her life directed and organized by others, first her parents and then her husband. She accepted it, and she played the roles expected of her. Now, however, she is facing "her general, surprised sense of never having managed to be herself throughout her singularly successful life." For once in her life, she has chosen for herself, and she will take the consequences of that choice. She struggles with the knowledge that her choice is a sin, and with her relationship with God - another theme in O'Brien's books. I was glad that she has a wonderful spiritual counselor in the Cardinal Archbishop of Toledo, one of my favorite characters. He calls her a conceited woman and a self-deluding creature - with a great affection - and tries to convince her to "Pray, child, and love Him. It's not such a very long journey from the love of man to the love of God." Ana's struggles felt very real, and very human, to me.

Kate O'Brien says in a brief Foreword that "What follows is not a historical novel. It is an invention arising from reflection on the curious external story of Ana de Mendoza and Philip II of Spain." She goes on to say that she has "retained the historical outline of events in which they have played a part," but that their words and writings, their thoughts and emotions, are invented. I'm not sure I understand the distinction she was making between a historical novel and an "invention." She certainly didn't pile on the historical detail, and her characters don't speak in ye olde quainte language. One even uses the word "psychology," which certainly didn't exist in the 1570s. But O'Brien evoked the period all the same, in much the same way that Dorothy Dunnett did, partly through simple details of daily life.

I feel like every novel of Kate O'Brien's that I read becomes my new favorite. It's certainly true for this book. I am still thinking about Ana and the other characters, particularly her daughter Anichu (theirs is such a close and loving relationship). And I cannot tell you how much I despise Philip II of Spain just now.

N.B. This novel was published in 1946, adding another year to my Mid-Century of Books.
Posted by Lisa at 7:54 PM