Jane of Reading, Writing, Working, Playing included this book in her Spirit of Christmas reading challenge, and as soon as I read her post about it, I headed off to find a copy. I figured it would be the perfect Christmas present to myself - and I was right.

Beginning in 1920, J.R.R. Tolkien wrote these letters for his children. The last letter included here was written in 1943, when his daughter Priscilla was aged 14. Father Christmas told her that year,


"I suppose you will be hanging up your stocking just once more: I hope so for I have still a few little things for you. After this I shall have to say 'goodbye', more or less: I mean, I shall not forget you. We always keep the old numbers of our old friends, and their letters; and later on we hope to come back when they are grown up and have houses of their own and children."

The first letters, to Tolkien's oldest son John, are fairly brief. As the years go on, they become more elaborate, with a cast of characters including the Polar Bear, who helps Father Christmas organize his work, when he isn't getting into trouble with his nephews Paksu and Valkotukka; and the Snow Man, the gardener, with his children the Snowboys. (The North Pole is a very masculine place.) Later on we meet the Cave Bear, whose tunnels have been infested with goblins, and the Red Elves who come to work for Father Christmas. There are some familiar Tolkien touches, particularly the elf Ilbereth, who becomes FC's secretary, and who writes in a beautiful flowing elvish hand. Polar Bear, wandering around lost in the goblin caves, became "quite long and thin with hunger...He said, 'I should soon have been able to squeeze through a goblin-crack'" - which sounds very Bagginsish to me. Under siege by goblin hordes, Father Christmas has to sound "the great Horn (Windbeam)," which calls "snowboys, polar bears, and hundreds and hundreds of elves" to help defeat the goblins.  And it made me laugh when Father Christmas told Priscilla and her brother Christopher in the 1937 letter, "I was going to send 'Hobbits' - I am sending away loads (mostly second editions) which I sent for only a few days ago) - but I thought you would have lots..." I had forgotten The Hobbit was published that year.

There are serious touches to the letters as well. In the 1932 letter, Father Christmas reminds the children "there are far too many people in your land, and others, who are hungry and cold this winter." The letters from 1939 on mention "this horrible war" and the suffering it brings. But he tells Priscilla in the last letter, in 1943, "I am still very much alive, and shall come back again soon, as merry as ever."

The letters are charming, but the illustrations are amazing. The time it must have taken Tolkien to devise the letters, write them in two or three different handwritings, and then illustrate them! I love the picture of Father Christmas on the cover of my edition: 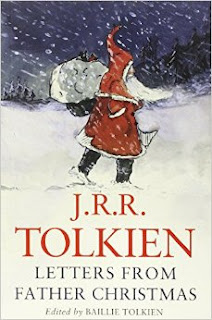 I know this is a book I will want to read again next Christmas. In the meantime, I'd like to learn more about Tolkien and his family, if anyone can recommend a good biography.
Posted by Lisa at 8:57 PM