A double dose of Miss Silver

I've been trying to ration my reading of Patricia Wentworth's Miss Silver mysteries, partly because I don't have that many left to read, and partly because it would be so easy to binge on them. I gave into temptation recently and read two, though not in a row. They were both published in 1955, which I only realized as I was writing this. I've been a little dubious about the later books in this long series, but I found these two very entertaining.

The first was Vanishing Point. I remember Vicki (skiourophile/bibliolathas) saying that she enjoyed this one. Here is the blurb from my later Coronet edition, which has I think a great cover: 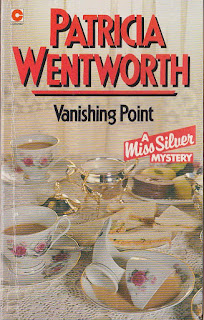 Hazel Green was as quiet a place as you could imagine. Nothing ever happened there except polite afternoon tea-parties spiced with village gossip. But suddenly something rather strange did happen. Maggie Bell went out one evening for a breath of air - and never came back.
Was her disappearance linked to security leaks at the nearby Air Ministry experimental station? Miss Silver is called to clear up the mystery. Just in time for the next disappearance...

She is called in by the police, to be exact. I think this is the first of her adventures to involve espionage! And Miss Silver goes to work on the case while knitting a hood and scarf in cherry wool for her great-nice Josephine, and she has time to start a twin set and then a pair of leggings for the child as well.

What amused me most about this book involves the central characters. Rosamond and Jenny Maxwell live with their cousin Lydia Crewe. Jenny was badly injured in a car accident, and she needed somewhere quiet to recuperate. Rosamond, who cares for her, is also working herself to the bone for Cousin Lydia in return for their keep. Jenny at twelve is bright and precocious, with dreams of being a writer. She has in fact sent some of her work to a publishing firm. One of their agents, Craig Lester, comes to Crewe House to meet her. He gives Jenny some advice about the writing life, and I presume he is speaking for his author here. Jenny chatters to him about her own favorite authors, particularly Gloria Gilmore and Mavis la Rue. Lester and Rosamond are rather scathing about their books, with titles like Passionate Heart and A Sister's Sacrifice. Lester advises Rosamond to "see that she has the right things to read - don't let her fritter away her taste on trash." He recommends a solid diet of Victorian novelists to "Stop the rubbish." I couldn't help but be amused at this attitude from an author whose books inevitably feature an angry young man who must rescue a beautiful young woman in danger (did I mention Craig Lester's temper?). But then Miss Wentworth's books are far from rubbish.

The second book was Poison in the Pen (a Christmas present from my friend Nancy, who noticed I was collecting Miss Silver books). Here is the back-cover blurb from the Harper edition I read:


When a mysterious suicide follows an outbreak of poison pen letters in the quiet village of Tilling Green, Detective Inspector Frank Abbott of Scotland Yard dispatches Miss Silver to investigate. Disguised as a vacationer, the retired governess stays with Renie Walsh, the town gossip, and learns of the marital and financial difficulties among the Reptons at the Manor House as well as all the petty details of life among the other village inhabitants.
It soon becomes apparent to Miss Silver that the suicide was murder...

Here again it is Scotland Yard that calls Miss Silver in. I thought this was a nicely twisted mystery, and I admit that Wentworth neatly pulled the proverbial wool over my eyes. I never saw the final twist coming. What particularly caught my attention in this book however is that it features a crazy cat man. James Barton, the village recluse and misanthrope, lives in Gale's Cottage with his seven tabby cats, all with Biblical names starting with "A" (Achan, Abijah, Abimelech and so on). Every night they join Barton in his rambles around the village, but neither he nor they are seen during the day.

Tilling Green is in the county of Ledshire, whose Chief Constable, Randal March, was once a pupil of Miss Silver's. I have met him in other books, but I haven't been keeping track of which ones. I think that his wife might have been involved in one of Miss Silver's cases as well. I am starting to think that Ledshire is rather like Midsomer County, at least in its homicide rate.

Oh, and in this book, Miss Silver is knitting a red-wool cardigan, a Christmas present for her niece Ethel, Josephine's mother. Hopefully the reds will look well together!
Posted by Lisa at 8:28 PM