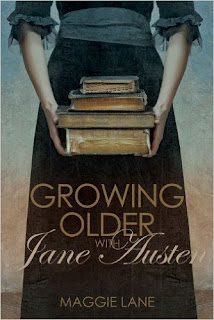 I love this cover!

The reviews in JASNA News, the newsletter of the Jane Austen Society of North America, tempt me with every issue. That's where I discovered this. I had already read two of Maggie Lane's books, Jane Austen and Food and Jane Austen and Names, both of which I found very interesting and informative (particularly the book on food). I also have her Jane Austen's England on the TBR shelves.

As you would guess from the title, this book is an exploration of age and aging in Austen's work. It draws on her letters as well as her novels, the juvenalia, Lady Susan, and the unfinished works (The Watsons and Sanditon). Maggie Lane also incorporates the real-life experiences of Austen, her family and friends. As she writes in the Introduction,


Unlike her parents and six of her seven siblings, who all lived into their seventies, eighties or even, in one case, nineties, Jane Austen did not see old age. She was just forty-one when she died, in the very prime of her writing life. But she did share, with everyone who outlives youth itself, the experience of growing older. Jane Austen at forty was a different woman from Jane Austen at twenty.
Like any thinking person, she was aware of the changes in herself wrought by time. . .

There are chapters on "The Loss of Youth and Beauty," "Old Wives" and "Old Maids," "Four Dowager Despots," and "The Dangerous Indulgence of Illness." Maggie Lane points out that Austen's main characters are young, but each book has a large supporting cast of people in different phases of their lives. Much of her discussion focuses on these characters. I had not appreciated before how


With the lightest of touches, Jane Austen grounds her characters in the age range they inhabit. Small details of clothes, hair or deportment, or more frequently and consistently of speech, outlook and habit, help us perceive her older characters to be middle-aged or elderly. We experience them as older people, acting and speaking in ways that distinguish them - yet without exaggerated effect - from the youthful cohort whose foils they are. In fact, from infancy to senescence, her characters act in age, while not sacrificing individuality.

I knew that Jane Austen with her many nieces and nephews appreciated the importance of aunts, but I had not realized how few grandparents there are in her books. She never knew her own, and none of her heroines has one. Jane Fairfax of Emma is the only major character to have a grandparent, in Mrs. Bates - and an inactive one, "a very old lady, almost past every thing but tea and quadrille." So Austen's heroines lack any guidance from that earlier generation, as do the parents of the heroines (some of whom stand in need of help and advice themselves, like Mrs. Dashwood in Sense and Sensibility).

I found the last chapter, "Nothing to Do but to Die," very interesting. Again, I had not considered how few deaths occur in Austen's novels (there are more, and comic ones, in the juvenalia). "Death is never gratuitous in Austen," Lane writes; "it always has some function to perform in terms of plot or character." Mrs. Churchill's death in Emma, the only one to take place in the course of the story, frees Frank Churchill to marry Jane Fairfax. Mrs. Tilney's off-stage death in Northanger Abbey is the only one described in any detail, and hearing the story from Henry Tilney has a huge impact on Catherine Morland and on their relationship. In this chapter Maggie Lane also considers the deaths in Austen's own family, including her own. In a short "Conclusion," Lane asks what Austen's life would have been like had she not died so young. "Professionally, she would surely have grown in both output and reputation. . . Did she have a Cranford in her? Or a 'Condition of England' novel?" How I wish we could know.

Reading this has moved Jane Austen's England up my reading list. And from the bibliography I had a couple of other titles in mind, Jane Austen's Family through Five Generations (Maggie Lane) and Jane Austen and the Body (John Wilshire).
Posted by Lisa at 2:47 PM