New books: Behind the Scenes, by Elizabeth Keckley

In addition to writing about books that I'm reading (books in progress), I thought I might also write sometimes about new books (new to me anyway) as they arrive.

When I was at the Barnes & Noble site the other day, ordering a copy of Catherine Clinton's Harriet Tubman, another book that popped up on the screen caught my eye. 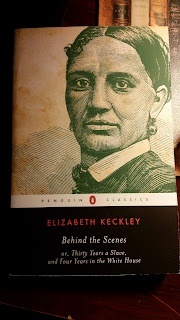 I knew Elizabeth Keckley's name from reading about Abraham and Mary Lincoln. She was an African American dressmaker who became Mary Lincoln's friend and emotional support during her troubled years in the White House and after. According to some historians, Keckley played a part in educating Lincoln on the realities of race and slavery, helping move him toward emancipation. I had no idea though that Keckley wrote an autobiography. The subtitle of her book, "Thirty Years a Slave, and Four Years in the White House," intrigued me so much that I immediately added it to my order.

The blurb on the back of this neat Penguin edition intrigues me even more:


The remarkable - and, in its time, fiercely controversial - memoir of the former slave who became an intimate witness to the Lincoln presidency.

Born a slave in Virginia, Elizabeth Keckley bought her freedom at the age of thirty-seven and set up a dressmaking business in Washington, D.C. One of her clients was Mary Todd Lincoln, whose husband had recently been inaugurated President of the United Sates. In time they became close friends. Their intimacy informs this extraordinary book, which is at once a slave narrative, a candid private view of the Lincoln White House during a violent turning point in American history, and the story of a friendship that continued after Lincoln's assassination. Condemned at its publication as an "indecent book" authored by a "traitorous eavesdropper," Behind the Scenes remains a poignant, revelatory work that belong on any shelf of Civil War or African American literature.

This book ticks so many boxes for me: a slave narrative by a woman, who emancipated herself, and then made her way to the center of political Washington, and into the heart of the Lincoln family, during the Civil War. Plus dressmaking! And apparently it was the publication of letters from Mary Todd Lincoln that made the book so "indecent" and "traitorous." (It's a safe assumption that a good part of the outrage over the book was because its author, the friend and confidant of Mary Lincoln, was African American.)

This is next on my reading list, despite the tall stack of library books due tomorrow - hopefully I can renew most of them.
Posted by Lisa at 9:13 PM