Not a lot of reading, but books still beget books

I haven't managed much reading in the last couple of weeks - at least of books. Instead, I have been reading though paperwork. After many years of apartment living, I finally decided it was time to buy a house. I was lucky enough to find one that I liked - and not just because of its built-in bookcases. Things have moved more quickly that I thought possible. It doesn't seem quite real, despite the thick stacks of contracts and loan documents and association covenants that I am carting around. Yesterday I received a 58-page inspection report, which made me realize how much I have to learn about the care and upkeep of a house.

People keep asking if I am excited, and I'm not, yet - I'm anxious and unsettled. And I haven't even started packing, though a friend has collected boxes for me. Normally, I would turn to some comforting books for distraction, like the Little House stories. (At least I don't have to pack everything into a covered wagon to move to a sod shanty.) Or Georgette Heyer, where servants efficiently move families between London and their country estates. Instead, I inched my way, a few distracted pages at a time, through a biography of Harriet Tubman and the autobiography of Elizabeth Keckley.

Reading about Harriet Tubman made me want to learn more about the Underground Railroad. Catherine Clinton, author of the biography, wrote about other prominent "conductors" and "abductors," including Tubman's "great comrade and benefactor" William Still. The child of a fugitive slave mother, Still became the central agent of the UGRR in Philadelphia,


the primary mover and shaker, spending much of his career risking jail and sheltering fugitives. He also kept a remarkable record of the stories of those who passed through his station from 1852 onward. His notes were hidden away in a cemetery until after the Civil War. Finally, in 1872, the publication of Still's manuscript provided the most detailed record of the inner workings of the Underground Railroad. This volume offers a black eyewitness to these extensive operations and amazing tales.

After reading that, I put in a request for his book, via interlibrary loan. It's a big fat volume, almost 800 pages. William Still originally began documenting his "passengers" to help families torn apart, by sale or other forced separations, to find each other again. The first account is of his own brother Peter, whom their mother had to leave behind in slavery when she made her escape. Neither brother knew who the other was, when they first met forty years later. William afterward helped Peter buy the freedom of his own wife and children, left behind in turn.

Because their work violated the national fugitive slave laws, most of the workers on the UGRR were careful not to leave any incriminating evidence around. Many of the fugitives they helped couldn't read or write. So very few records of this work survive, and that makes William Still's book unique. The stories are amazing, and heart-breaking, and enraging, in turn.

It can't be coincidence that I had already found this in the new books bin at the library: 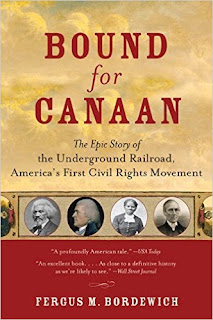 I'm sure eventually I'll need to take a break from history, for something lighter, but for now I am happily riding the rails.
Posted by Lisa at 9:18 PM