Keep Going and Like It, by Marjorie Hillis Roulston

Reading Jane's review of Marjorie Hillis's Live Alone and Like It reminded me that there were other books by Hillis to read - and now a book about her, The Extra Woman by Joanna Scutts. I was happy to find two of her books available through inter-library loan. The first to arrive was this one, subtitled "A Guide to the Sixties and Onward and Upward With Some Irreverent Rhymes."

Chapter One, "The Young Sixties and Seventies," begins,


This little book is written in the belief that you can have as interesting, useful, and even gay life in the sixties and seventies and often the eighties as at any other time in your life. You can also be miserable. The latter is equally true at twenty, thirty, forty, and fifty.

Chapters on the active life, travel, clothes and make-up, illness, housing, dating, and food follow, much as in her earlier books. There is also a chapter on grandchildren, which is more about how to be a good grandmother. A central theme of this book, as in her earlier ones, is that life take planning and purpose, and some effort, if you want to get the most out of it.

Despite the similarities to Hillis's earlier books, I didn't enjoy this one nearly as much. It was written thirty years later, in 1967, yet paradoxically it feels more dated to me. And while Hillis was careful to include advice for those on limited budgets, the book seems aimed more at the well-off. She takes it for granted that her readers will have a maid at least. (If moving, they might want to find a home with easy access to a movie theater, to please the help.)  I felt her photo on the back cover suggested the type of woman she was writing for here, fur cuffs and all. 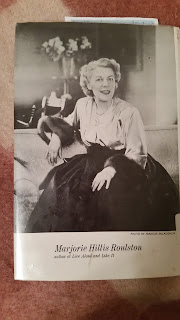 I also missed the (probably fictional) "Case studies" that Hillis used to underline her points in the early books. I don't think that her "irreverent rhymes" added much to this book. She wrote another book, Work Ends at Nightfall, entirely in verse. I haven't looked for a copy of it yet. On the other hand, she includes more examples and anecdotes from her own life, and those I did enjoy. And it was a pleasant surprise to come across two references to Houston. She commended the excellent opera company here (still going strong), and she included it on a list of cities worth visiting for their "art, culture, shopping, and night life..." (recommending travel in the U.S. and Canada, and not just for those who can't afford to travel abroad).

In the end, this was a couple of hours' pleasant reading, but not a patch on Live Alone and Like It. The other book I have requested is You Can Start All Over, is a guide for widows and divorcées - the latter still slightly scandalous, I would think, when it was published in 1951.
Posted by Lisa at 9:37 PM