The cover of this book caught my eye in Barnes and Noble. Any cover with Lincoln on it will get my attention. 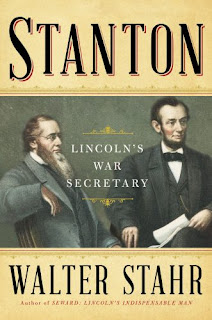 Then I realized the book was by Walter Stahr, who wrote an outstanding biography of Lincoln's Secretary of State William Henry Seward. And just like that, I had found another Christmas present for myself!

Edwin Stanton was like Lincoln himself a lawyer. He was a much more prominent and better-paid lawyer, in fact. He was also a Democrat, but he strongly supported the Union, particularly after Lincoln's election brought Southern states to secession. In December of 1860, Stanton accepted the office of Attorney General in the cabinet of outgoing president James Buchanan. In those last months of his administration, Buchanan waffled over how to respond to secession, allowing Southern states to take over government property, including arsenals and weapons. (Until this year, Buchanan was often rated the worst president in American history.) In the cabinet, Stanton was among those pushing the president to protect and preserve the Union. One year later, when Lincoln's Secretary of War had proven himself incompetent and (some said) corrupt, he offered the position to Stanton. Stanton had no military experience, but he was hard-working, a very skilled organizer and executive, and incorruptible. He was committed to Lincoln, to preserving the Union, to winning the war. He became equally committed to the African American soldiers that he welcomed to the army, and to the former slaves emancipated by Lincoln's proclamation and Union victory. Stahr argues that "Lincoln deserves his reputation as the 'Great Emancipator,' but Stanton should perhaps be known as the 'Implementer of Emancipation.'" It was his commitment to the freed people that led him into conflict with Lincoln's successor, Andrew Johnson. Johnson wanted political and social control of the Southern states returned to whites. Johnson's attempts to remove Stanton from his cabinet led to his impeachment, the first in U.S. history.

Walter Stahr has written another excellent biography. I knew something of Stanton from all that I have read about Abraham Lincoln and the Civil War. They had a close partnership in the war, and they genuinely loved and respected each other. I did not know much about Stanton's early life, which was not an easy one. After his father's death left the family in poverty, he was apprenticed at age 13 to a bookseller. "A friend remembered that Edwin was 'just high enough to get his chin above the counter...'" I was fascinated by his later work for the government, investigating land claims in California. Stanton traveled out to California and spent months in archival research, collecting boxes of documents that eventually helped prove the deeds presented in court were forgeries. It was also fascinating to see the Civil War from a different perspective, through the work of the War Department. Stahr highlights the ways that Stanton used the power of his office to silence dissent, through arrests and trials before military commissions, which denied the accused their rights. He also used that power to help Republicans win elections, playing a key role in Lincoln's 1864 re-election. And he took control of the investigation into Lincoln's assassination and the trial of the accused conspirators.

Stahr recognizes and pays tribute to Stanton's gifts, to the immense contributions that he made to winning the Civil War and to helping the freed people. But he doesn't gloss over his many faults. He quotes frequently from my favorite diary-keeper of the period, George Templeton Strong.  As an officer of the Sanitary Commission, helping to care for Union soldiers in the field and hospital,  Strong had to work with Stanton. He wrote of Stanton after his death,


Good and evil were strangely blended in the character of this great War Minister. He was honest, patriotic, able, indefatigable, warm-hearted, unselfish, incorruptible, arbitrary, capricious, tyrannical, vindictive, hateful, and cruel. Robespierre had certain traits in common with Stanton. I mean no disrespect to Stanton, who was infinitely bigger and better than that miserable Frenchman - but their several failings were not unlike.

In the end, Stahr argues that "Stanton was not a good man, but he was a great man."


He played a central role in winning the central war in American history. He lived and worked with great men, Lincoln and Grant and Sherman. He was one of them. For all his faults, he deserves our praise.

I agree, and I think this biography does him full justice.

I don't know what Walter Stahr will write next, but I will read it. I'd love to see him tackle the other members of Lincoln's cabinet. I nominate the Secretary of the Navy, Gideon Welles, who was a difficult character in his own right. He left behind a wonderfully snarky diary covering the war years (Stahr quotes his unkind comments on Stanton). It was recently published in a new edition that I have so far resisted buying.
Posted by Lisa at 8:18 PM