Blood on the Tracks, edited by Martin Edwards 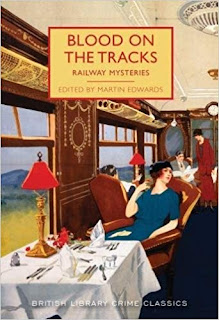 This British Library Crime Classics volume of "Railway Mysteries" went on my list as soon as I saw the cover (on Twitter, as I remember). There was a delay before the North American edition came out, but it was well worth the wait. This may be my favorite of all the collections that I have read (even if it lacked a story by H.C. Bailey).

As usual, it presents an interesting variety of stories, arranged generally chronologically by publication date, with an informative preface by Martin Edwards and brief introductions of each author. Most of the collections that I've read open with a Sherlock Holmes story, as this one does, "The Man with the Watches." I was familiar with some of the authors that followed, from meeting them in the other collections. Some were new to me. I was particularly taken with Matthias McDonnell Bodkin, "who proceeded to create a whole family of detectives. He began with Paul Beck," who later married "Dora Myrl, Lady Detective," and their son Paul Junior went into the family business. Bodkin's story in this collection, "How He Cut His Stick," features Dora Myrl in her spinster detective days. She sounds like quite a character:


The daughter of a professor, Dora studied medicine at Cambridge, drifting from job to job (as a telegraph girl, a telephone girl, and a journalist) before turning to crime-solving while acting as a companion to an elderly woman who falls victim to a blackmailer. Dora's intelligence and flair for disguising herself make her an effective detective when she sets up her own agency. In this story, her ability as a cyclist also comes in handy.

I was reminded of Grant Allen's Miss Cayley, another cyclist who falls into a detective adventure.

This collection introduced me to another woman detective, F. Tennyson Jesse's Solange Fontaine. The story here, "The Railway Carriage," gave me chills, and sent me looking for more of her stories. I also learned that Jesse's best-known novel, A Pin to See the Peep-Show, is based on a notorious murder in 1922, and I have added that to my reading list.

One of Dorothy L. Sayers's Peter Wimsey stories is included here, "The Unsolved Puzzle of the Man With No Face." I have the Lord Peter collection, but I don't read the short stories very often, and I had no memory of this one at all. It ends on an odd note, one that seems to me very out of character for Lord Peter.

The worst of these collections is that they always tempt me to look for more by the authors. In addition to F. Tennyson Jesse's Solange stories, I also found collections of the stories of Max Carrados (the blind detective created by Ernest Bramah) and Dr. Thorndyke (the scientific detective of R. Austin Freeman). I still have a couple of the Crime Classics collections on the TBR shelves as it is, and I'm hoping there are more to come. I'm eagerly awaiting the Golden Age of Detection Puzzle Book, which should be out next month in another gorgeous cover. 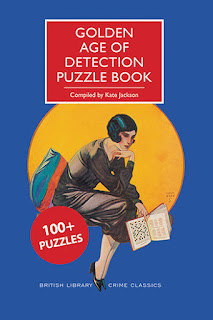