It is a truth universally acknowledged that going to a book signing always results in the purchase of more books. At least that is my experience at Murder by the Book. I get there well ahead of time, and then I wander through the shelves. Each visit, I check for new releases in the British Library Crime Classics series. I also check for Patricia Wentworth's books. There are some lovely new re-issues of the Miss Silver books, which I've managed to resist while I have my battered reading copies. The Dean Street Press re-issues of the stand-alone books, the ones without Miss Silver, are a different matter. Here, though, I have become selective. I've found that the earlier books, from the 1920s, are entertaining enough but sometimes a little thin for my tastes, sometimes verging on the silly. I think the books from the later 1930s and the 1940s are the best. This week I found two from 1938, Mr. Zero and Run! - the exclamation point in the title gives that one some urgency.

When I felt like a break from my recent science fiction diet, I chose Mr. Zero, and I enjoyed it thoroughly. As much as I enjoy the period illustrations on the DSP editions, though, they don't usually relate to the book itself. The cover for this one is particularly misleading: 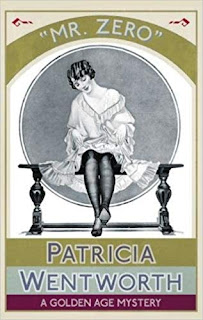 At no point does a character lounge around provocatively en deshabille, and to my mind that image looks more like the 1920s than a woman in 1938.

The "Mr. Zero" of the title is a blackmailer. His victim Sylvia Colesborough has lost £500 at cards and cannot confess the loss to her husband, who has forbidden her to play for money. Mr. Zero offers to make good her loss, on the condition that she steal a document from the Home Secretary during a weekend house party. Sylvia complies, but she is then met with a second demand, to extract more documents - from her own husband. At this point she panics, and with her sister enlists the reluctant help of their old school friend Gay Hardwicke. When Gay tries to confront the blackmailer, she walks instead on Sylvia holding a gun next to a dead body. But it is her escort Algy Sommers, a secretary to the Home Secretary, who becomes the prime suspect.

This is quite an exciting story, with a neat twist at the end. I guessed the identity of one of the villains, mainly because there was such a small cast to choose from, but I didn't expect the second to pop up. I must say that I have rarely met a stupider character than Sylvia Colesborough. Though fun to read about, she infuriated most of the others in the book. At one point the Chief Constable "Colonel Anstruther was given up to whole-hearted wonder as to why, if murder was the order of the day, Lady Colesborough had escaped."

Drawn into the case is the local doctor and coroner, Dr. Hammond. He is at home with his wife Judith, asleep next to him, when he recollects a vital clue. He wakes Judith from a dream about a child to tell her. "'What fellow?' said Judith, half cross and half forlorn. Perhaps she and Jim would never have a child. Perhaps -" I ended the book wondering if we might meet the Hammonds again, and if Judith ever had her baby. Miss Silver is always relaying news of marriages and births in her books, not to mention knitting for the babies. I don't remember any characters crossing over in the stand-alone books, though.
Posted by Lisa at 11:57 AM