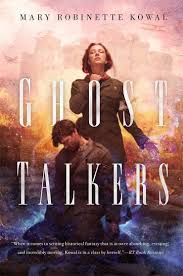 I loved the cover of this book, and the story caught me from the first page:

"The Germans were flanking us at Delville Wood when I died."
Ginger Stuyvesant had a dim awareness of her body repeating the solder's words to the team's stenographer. She tried to hold that awareness at bay, along with the dozens of other spirit circles working for the British Army. Even with a full circle supporting her, she ached with fatigue, and if she weren't careful that would pull her back into her body. It wouldn't be fair to force Helen to assume control of the circle early. The other medium was just as exhausted. Around them, the currents of the spirit world swirled in slow spirals. Past events brushed her in eddies of remembrance. Caught in those memories, scent and colour floated with thick emotion. The fighting at the Somme had kept the entire Spirit Corps working extra shifts trying to take reports from the dead, and the air was frigid with souls.

In this Great War, the British Army has a secret weapon. Mediums have worked out a way to route the souls of the soldiers who die on the battlefield away from The Light long enough to report what they saw just before their death. "Spirit circles" linked through the mediums help them take these real-time reports while anchoring them firmly in this world. The information collected by the reports shapes British tactics and strategy. The crucial work of the Spirit Corps is camouflaged by the Women's Auxiliary Committee and its hospitality centers. Ginger's aunt, Lady Penfold, is the head of the Spirit Corps, reporting to the Army - though she usually skips all meetings, leaving Ginger to make the actual reports to the sometimes difficult Brigadier-General Davies.

On the same day that Ginger is taking reports from Delville Wood, she has a visit from her fiancé, Captain Benjamin Hartford, an intelligence officer. He brings bad news: "We've received reports that the Spirit Corps is being targeted by the Central Powers. . . The last thing [one dying soldier] heard was, Noch ein gespenstiger Spion . . . Another ghost spy."

I enjoyed this story on several levels. The work of the Spirit Corps is fascinating, with its circles of mediums and "mundanes," and the sensitives in between, each with her or his part to play in the work. Ginger's circle includes a soldier who lost a leg on the battlefield but chose to stay to work with the Corps rather than being invalided out. I enjoyed the interviews with the soldiers reporting in, as sad or difficult as they sometimes were. After drawing out the military information, the mediums encourage them to leave messages for family or friends. The magic of the story is grounded in the realities of the First World War. It was clear to me that Ms. Kowal had done her research, even before I read the "Historical Note" at the end of the book.

This being a story of the Great War, I was braced for a lot of deaths. I began to suspect early on that one character was doomed, and I decided to skip to the last chapter to check. Sure enough, this person was dead. I was a little put out by that, since I liked them. When I went back to my place in the story, I turned the very next page and read about their murder - which surprised me. So the story shifted to become a murder mystery, alongside the intelligence work both through the Corps and the officers like Captain Hartford, assessing in particular the risks to the Corps. But here those investigating the murder have the assistance of the victim, though their memories may be fragmentary and incomplete. And the recently-deceased become difficult to work with over time, even for experienced mediums.

I would happily read more stories of the Spirit Corps. In the meantime, I went looking for some of the books Ms. Kowal cited in the "Historical Note," starting with A Nurse at the Front: The First World War Diaries of Sister Edith Appleton. I'm also hoping interlibrary loan can find me a copy of Kate Adie's Fighting on the Home Front: The Legacy of Women in World War One.