Bibliotherapy at the end of a tough week

This was a full-moon week, for sure. Too many things to do, too many deadlines and appointments. I felt off-balance all week, like the Red Queen running as fast as I could just to stay in place. And to cap the week off, I had a meeting with my tax adviser this afternoon. (At least it looks like I'll owe less money this year.) Heading home afterwards, I felt I deserved a treat - or a prize for getting through the week. I started with a chai latte at Starbucks and then plotted a course for Kaboom Books. Though I had Willa Cather and Margery Sharp in mind, I wasn't looking for anything in particular. As usual, I found some irresistible books there. 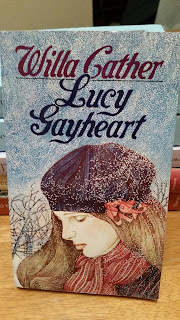 I had not come across this 1935 novel before. The back cover has a quote from the Times Literary Supplement that sold me on it: "In Lucy Gayheart, Willa Cather seems to be writing the lightest and slightest of records of a short life: the obscure life of a young girl in an American village who goes to Chicago to study music . . . but the impression left on the reader is not slight . . . The unity of Miss Cather's design, the clarity and distinction of this book should put it beside her first great success, My Antonia." 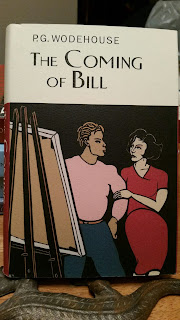 Another book I knew nothing of, despite my years of collecting P.G. Wodehouse's books. The back-cover blurb says that this is "the nearest Wodehouse ever came to a serious story," but it also mentions "a series of of comic mishaps in a book which features a galaxy of vintage Wodehouse characters." I see it was published in the U.S. as Their Mutual Child. I just mentioned in a post on Indiscretions of Archie that I've never read a Wodehouse book with a pregnant character - and here apparently is another. Though if the woman on the cover is pregnant, she is carrying that child in a very odd place. 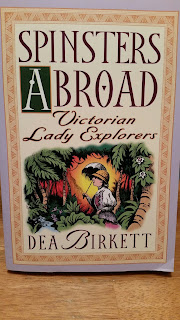 This book sold itself on the title and cover alone. I see that Isabella Bird and Amelia Edwards are included, and I'm looking forward to meeting more of their intrepid sisterhood. I also see many lovely illustrations  - and maps! Lots of maps, for the geographically-challenged! 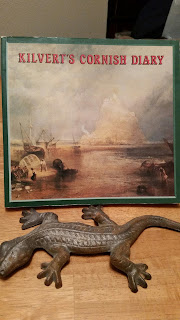 I instantly thought of Jane of Beyond Eden Rock when I saw this book. I enjoyed reading the three volumes of Rev. Francis Kilvert's diaries from the 1870s, but I was frustrated by the editing, which (as often happens) cut out things that I wanted to read about in favor of things the editor wanted to talk about. (See also: the diaries of George Templeton Strong.) This small volume covers a holiday that Kilvert spent in Cornwall in 1870. "This is the first complete edition of Kilvert's Journal No. 4..." I love the words "complete edition," as well as "Copiously illustrated with contemporary photographs and engravings - some of which are published here for the first time..." 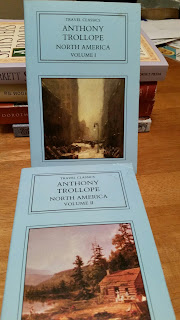 Some time ago, I came across Vol. II of Anthony Trollope's 1862 travelogue North America, in the edition above. Having already read an extremely condensed one-volume edition, I bought it, even though Vol. I was not on the shelf, because complete editions of these books are hard to find (in print). I felt sure that someday I would come across the first volume, and today I did. But it was on sale with the second volume, as a set. I can understand that the proprietor didn't want to be left with an odd Vol. II that was unlikely to sell (except to a hopeful reader like me). So I bought the set, which at least wasn't expensive. If anyone would like the orphaned Vol. II, I'd be happy to send it along. I think it may be the more interesting of the two anyway, since it covers Trollope's visit to Washington and to the western theatre of the Civil War and its armies.

More for the TBR stacks, but at least I think I can resist them for the remainder of the TBR Dare (I've resisted Vol. II of North America for quite a while now).
Posted by Lisa at 8:57 PM