What a delight this book turned out to be! I first learned of it from Barb over at Leaves and Pages, during last year's Margery Sharp celebration. I just skimmed her review, to avoid spoilers, but I must have skimmed too lightly. I was left with the idea that this is a book about a group of Londoners sharing a house and coping together during the Blitz. (It's not.) When my copy arrived, the cover didn't quite fit my (completely erroneous) idea of the story: 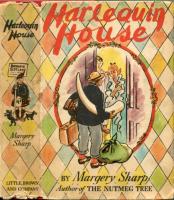 I was particularly puzzled by the man in a kilt with a sign saying "Bonnie Scotland," on the spine. It turns out he is the same gentleman holding the elephant tusk on the cover, the one wearing the bright red socks. And he is the first person we meet: Arthur Alfred Partridge, who runs a two-penny library in the seaside town of Dormouth Bay. On the day the story opens, he has given in to his lawless side. He has closed his library in the middle of the afternoon, illicitly cut a rose from the municipal gardens, and strolled out to the promenade. There he encounters Miss Mildred Pickering, an elderly lady who is staying at the Dormouth Towers Hotel with her niece Lisbeth Campion. Later, he joins them at tea in the hotel. I was quite taken with Mr. Partridge and his bright red socks, and with Lisbeth. We first meet her, "engaged, as usual, in resisting advances." She is a young woman of great charm, who sometimes deploys it with intent, but we also learn that she is carrying a heavy weight of grief and worry.

Still later, wandering around the town that night and wishing for something interesting to happen, Mr. Partridge sees Lisbeth driving off with another guest from the hotel, Charles Lambert.


Mr. Partridge's first thought was purely instinctive. Because he acted on it, it was to have far-reaching effect, it was to turn the course of several lives; but it was based neither on reason nor even on common sense.
"Can't have that," thought Mr. Partridge.
For all he knew Miss Campion and Mr. Lambert were simply going for a run along the cliff. If he had stopped to consider, some such innocent explanation would at once have presented itself. But he did not stop. The car had almost drawn clear. Its rumble, open to accommodate an up-ended suitcase, was already all of it that Mr. Partridge could see. He had no time to consider, he had time only to jump forward and grip and scramble over the smooth side. He had certainly no time to settle himself. The car, leaping from first to second gear, did all the settling for him.
It wasn't going along the cliff. It was going to London. It wasn't a Dormouth Bay car.

The mixture of concern and curiosity that launches him into the car - along with a healthy dose of boredom - leads him to Trafalgar Square, in Lisbeth's wake. There he discovers what has brought her to London in the middle of the night, and he simply follows along. Though she only met him that day, Lisbeth accepts his company and then his assistance. Which leads later to his arrival on her doorstep, with an elephant tusk, a cuckoo-clock, and 152 pairs of red socks.

I don't want to say too much about the story. I had an idea where it was going, but Margery Sharp surprised me more than once with twists that I didn't see coming. (At least I figured things out before Mr. Patridge did, though!) And I think this book has the neatest and the happiest ending, of those I have read so far.

I do have to mention the job that Lisbeth finds for herself. It's with a firm called "Wanted Women,"


[which] was the direct result of the declining birth-rate and the Suffragette movement. Under Victoria the Good, even under Edward the Peacemaker, it would have been unthinkable; for in those days there was still an adequate supply of active single women ready to run about and perform extra tasks for the more fortunate married. (Miss Pickering, taking charge of her sister's two children, and being dispatched with Lisabeth to Dormouth Bay, was a good example.) But since then times had changed: the ranks of these useful creatures had been thinned: some had entered the professions, some preferred to work for (and be paid by) strangers, some had simply not been born. Wanted Women stepped into the breach. It would supply, on the shortest notice, a competent gentlewoman to supervise spring-cleaning, take children to school, shew country-cousins the town, meet trains, exercise dogs. The shades of a thousand Victorian aunts must have been constantly wringing their hands at this intrusion of hired help into the family circle; but Wanted Women was prosperous and busy.

I think I'd like to work for Wanted Women!
Posted by Lisa at 9:24 PM